WebSockets: How to Give a Slide Presentation from Halfway Across The World

In this article I describe how to use the ASGI interface for listening for messages from a server. Essentially, it works like a server in reverse, where the client makes decisions based on what’s sent from the client.

I figured I’d test it out on a simple project I’ve had in mind that I wanted to tackle… presenting chruch lyrics remotely.

Before I delve into a code, let me explain a bit about the example problem.

I used to run the overhead at my church. For those not familar with church, during worship service it’s common for the current song to be displayed on a large display screen for people to join the worship team, kind of like this: 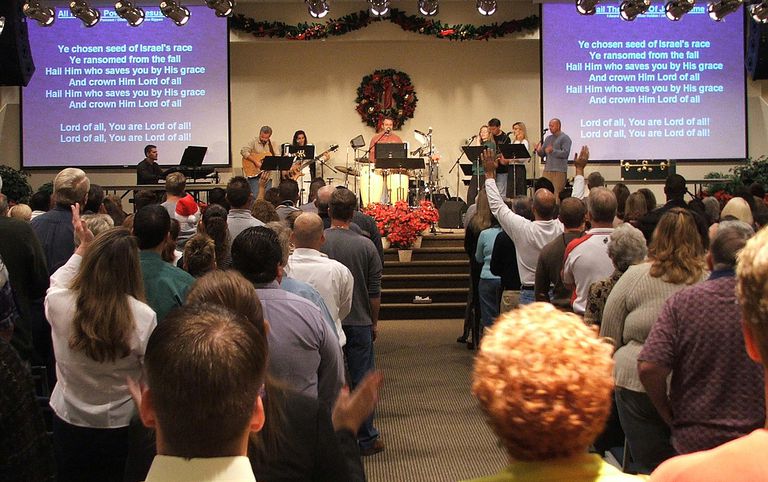 Most churches use PowerPoint for this. If a church is technically-adept enough, they’ll often use a special church presentation software. OpenLP is one awesome open source application I’ve used, but there are some really great commercial versions as well.

But most of these involve a person having to sit in a central location to control the screen.

I thought one day.. “What if the person running the lyrics can sit anywhere?” Maybe they’re ill with the flu and they need to stay home but they’re the only one who can run it. Or they want to sit with their family.

So, can we design a system that listens for commands (perhaps given by a REST request) then hands that command off to an application to display?

On a Web Page

Another “requirement” – let’s use the browser as the application container. Can this work? What’s needed for a church presentation?

Obviously, #3 is covered on day 1 for any web development course. What about #1? Is it possible to get full screen in the web browser?

If you’ve ever used Netflix or YouTube (and who hasn’t?), you know the answer is yes. But what part in the stack controls this?

A quick search of the Mozilla Web API reveals that it’s part of the JavaScript API. Not only that, but most of the functions are supported by most major browsers.

While implementing full-screen would be a fun exercise, though, I want to focus on #2 - navigation.

For our demonstration we’ll use the lyrics from an old-time classic _Mary Had a Little Lamb_:

Mary had a little lamb.

It’s fleece was white a snow

And everywhere that Mary whent

The lamb was sure to go

Typically for worship presentatations there are multiple lines per slide, but for the sake of simplicity we’ll use one line per slide.

Since we’re having to listen to actions, let’s put the lyrics in a class to have easy control over them.

WebSockets allow a client script to wait and receive commands from a server. You can think of it as like a server all its own, but running in the client space.

For our application, the JavaScript code for the web pages will open a connection with the server and wait for commands form a remote client.

The server will need a request framework to listen for connections. The server framework can be whatever you want it to be but for our purposes we’ll be using Node.js, so the Express library will be used.

We’ll worry about this last, since REST will be used for the transport layer. We can send the command over curl if needed, as long as it agrees with the Server’s schema.

Design of the Sever.

We need to think of this in reverse. We essentially don’t care what the FE is sending us (yes, in a production application we need to worry about logging in, errors, and more–remember, start simple). We’re only concerned with what the C is sending us, and then we’ll send that to the FE.

How Not to Design It

During the first itereration, I thought, all right, simple enough…create an express application to listen both for WebSockets and HTTP requests…

Unfortunately, this does not work as expected. Why?

Simple. We’re just listening for HTTP requests and not WebSocket connections. So the connection will never be open.

Which means we need 2 apps running.

The first app (recv) will listen for commands from the C. The second app (app) will determine what lyrics to display based on the key press.

You might notice that there’s no way recv can communicate with app. Here’s a diagram for what’s going on

We need something to connect the two services.

Redis is an in-memory database and is used frequently for inter-process communication.

There’s no need to create your own queue framework, either. Libraries exist that include this functionality. For this project, RedisSMQ (Simple Message Queue) is used.

While in a production environment it’s best to hook this into the app startup, we’ll simply add it directly into the script:

app: Send Commands To the WebSocket

This is pretty straightforward from a coding standpoint save for one caveat:

Now for the caveat. We need to add a time to sleep in order for recv to wait for the queue to clear. Otherwise, if next is the command given, recv will keep getting next, next, next, … until the command is popped.

Ideally a mutex would be used to prevent this from happening, but for now we’ll use a timer and sleep for 10 microseconds (I found this value worked after some experimenting).

Waiting for Commands from the Client

We still need to add paths for express to listent to the client. This is even simpler than for app:

Waiting on the FE

I’ll just show you the code for the page. It’s pretty straightforward:

The one thing extraneous I did was add styling to commands. But that’s optional.

Another note is that if the server is reloaded (e.g. due to a change) the WebSocket connection will be lost. Just reload the webpage.

The awesome thing is that this can be done using CURL (or Insomina, or any other REST client)

For example the following URL will display the first slide on the client:

Consequently, we’ll go to the next slide with the following command:

How awesome is that! The webpage obeys our command without us touching it!

WebSockets allow the programmer to send data from a server to a client. In this example, we got to see how it can be used for a remote worship service.

At this point the web page listening (or any client listening) to the WebSocket was able to receive a message from the server. JavaScript on the client web page then handled the display of the lyrics for the current slide.

For those interested, here is the full server source code: